This is by far my favorite Silly Song ever. I think it may have also been my first– but that doesn’t bias me!

The scene starts out with Larry the Cucumber, dressed as a member of a “boy-band” saying that this is the normal time for silly songs, but they have decided that they are artists, and should express themselves artistically. Mr. Lunt, Junior Asparagus and Jimmy Gourd make up the rest of the “band” and they take poses like they are having their picture taken.

The song starts with the Veggies coming into a doctor’s office. The bottom left hand corner has typical music video credits naming them “Boyz in the Sink.” Mr. Lunt is the soloist– he goes into the examination room and starts singing how he needs to tell his (presumably) girlfriend how there’s this thing about him he has to tell her– namely, that he doesn’t have a belly button.

The song then breaks into the quartet, having various moves and shots that look like a music video. The quartet is amusing, and the tune is simple. It’s really funny for you think of someone singing about not having a belly button.

The song then changes to a sound like rap– and this part they certainly could have done without. Kahlil from Jonah shows up as the doctor, and explains to Mr. Lunt that since he’s a gourd the equivalent to a belly button is the stem on his head. He continues telling him that he could get a prothetic, which would be covered by his shirt, but not his HMO.

The nurse finally gives up, and leaves. On her way out, Mr. Lunt asks if he still gets his lollipop. 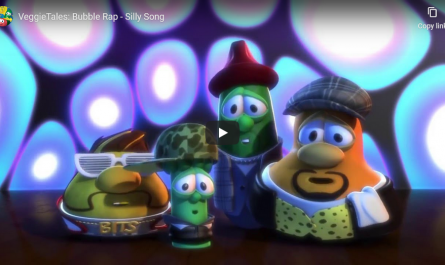