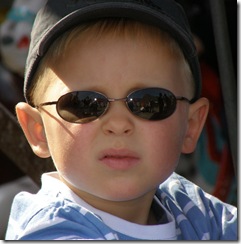 One of the neat things about technology is that as it progresses it gets easier to use and more powerful.  When I was a child, video cameras were just coming out with big VHS tapes and the first VeggieTales movies were VHS all the way up into the 1990s!

I can remember that when I was a kid the big thing was that my mom got a Polaroid camera that developed in a few minutes (as long as you didn’t touch it).  Now, most people are skipping the film altogether and are opting for digital cameras that not only allow you to take pictures, but to fix or change pictures before they are printed!

That, and you could send pictures to people thousands of miles away via e-mail at no cost.  So people could literally see what their grandchildren looked like the same day that they talked with them on the phone.

Best of all, if a picture didn’t turn out well you could find that out before you had it printed, instead of waiting until the film was developed and then seeing that your child wasn’t looking at the camera.

Of course, this new power also meant that you would have added stress in picture taking.  Now, you can see instantaneously whether or not every one of the kids in the picture smiled or whether Dad was picking his nose had a funny face.

And you can also change the color of your children to make them stand next to Bob and Larry– or put their faces on Bob and Larry.  You could put yourself in an exotic locale that you’ve never visited, or change the picture to look like it happened at some other time.

The possibilities are endless, and all because of digital cameras.

Give a Gift with Meaning