Summary (from the DVD Case):

Now, y’all have heard the story of Joseph and his coat of many colors before, but I reckon you’ve never heard it told as a Western… until now!

Join Little Joe (played by Larry the Cucumber) and his rootin’ tootin’ French pea brothers on an adventure that will take them from an abandoned mineshaft all the way to Dodge Ball City — with Little Joe’s faith being tested every step of the way!

It’s a Wild West yarn that teaches us to keep the faith when facing hardship because, in the end, God can work all things out for good.  Yee-haw!

Little Joe was the first VeggieTales DVD produced after Jonah: A VeggieTales Movie came to the big screen.  It contains an updated rendering of Bob and Larry, and it features a Western Setting for the first time.  It is also one of the few VeggieTales where Khalil makes an appearance– though that is only in the silly song.

Larry and Bob break into an argument trying to solve the letter of the week’s question when Larry reminds Bob that he promised that the next show could be a western since Larry had just returned from cowboy camp.  This causes a screen to be put up displaying “technical difficulties” as Bob and Larry duke it out eventually deciding on telling a “Western Bible Story.”

The Ballad of Little Joe

The story is set in the Ponderosa set with the all of the sons of Jacob as peas except for Joseph (Little Joe aka Larry the Cucumber) and Benjamin (Junior Asparagus).  The peas are having trouble because every time that they go to count their sheep they fall asleep.  Little Joe suggests that they put the sheep in groups and then count them like that.

They are all called into the house for Little Joe’s birthday cake (prepared by Mr. Lunt) and Little Joe is given a cowhide vest of many colors that says “OK” on the back.  The brothers are jealous because all they get for their birthdays are mittens (another “we don’t have hands” gag).  For Little Joe’s birthday wish he tells them about a dream of cactuses bowing down to him.

The peas don’t like this, so the next day they trick him into falling into an abandoned mineshaft until some Desparados come.  Larry utters the famous line about the Desparados coming to their senses.  They then switch to a Bonanza style map showing where they traveled eventually having it burn up.

Little Joe finds himself in Dodge Ball City (better move fast or yer out) working in Mr. McPotiphar’s house.  He sells rootbeer and pizza and has organized and stabilized the place enough to become employee of the month.  This upsets Madame Blueberry, the singer, who tries to get Little Joe to take some money and leave (a play on Potipher’s wife tempting Joseph to lie with her.)  When he refuses, Blueberry stuffs the money in Little Joe’s costume and then calls Sheriff Bob in calling Little Joe a thief.  Little Joe is jailed.

This silly song starts with Larry, Jimmy, Junior and Mr. Lunt saying that this is a time to be serious and that they want to broaden their scope artistically.  They call themselves Boyz in the Sink, and they sing a boy band type song about missing a belly button.  This song includes a lot of shots that look like a music video and has a rap section by Khalil.  The best line comes from Khalil saying that Mr. Lunt could have a prostethetic, but it would be covered by his shirt, but not his HMO.

Little Joe shows that he can organize once again by turning the prison into a quilt production machine.  He interprets the dreams of the Baker (Jimmy) and the Blacksmith(Jerry) (the Baker and the Wine Tester in the real story).  He gives them the answer to their dreams– the baker will go back to his job, the Blacksmith would be going up the river.

The next day, his prophecy comes true, and days later the Baker remembers Little Joe and tells the Mayor (Mr. Nezzar) that Little Joe can interpret dreams.  Little Joe is called up, and gives the interpretation that there will be seven years of good followed by seven years of famine.  the Mayor asks Archibald Asparagus how his sock drawer is organized, and the appoints Little Joe in charge.

They store up Mr. Twisty’s Twisted Cheese curls and pizza in a silo, then the wind blows in.  Shortly thereafter, Little Joe’s brothers show up looking for food.  Little Joe has Sheriff Bob put some money like pepperoni on a pizza given to Junior.  Little Joe goes to jail Junior and all the peas go in there as well.

Little Joe takes off his mustache and reveals himself to his brothers, who bow down to him.  Just then Pa shows up with the moose head and the mittens.

There’s this running gag going on with dodgeballs, robbers and a guy outside of town, which I’m not quite sure what’s going on!

At the conclusion we see some more of what Larry did at cowboy camp and get the lesson.  We then learn that Larry is off to Danish Immersion Camp and then they say goodbye.

VeggieTales: The Wonderful Wizard of Ha’s 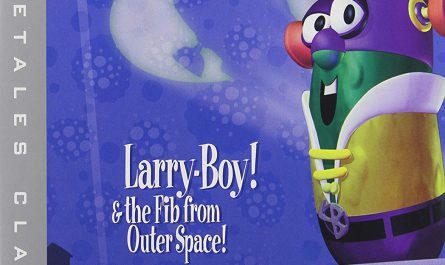 Larry-Boy and the Fib From Outer Space